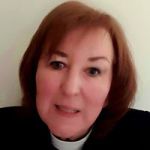 Pastor Linda Larson was born in New Brunswick, New Jersey, and grew up in nearby Edison. She graduated from Edison Township High School, where she was inducted into the National Honor Society. Before completing her education and preparation for ordination, Pastor Larson served for many years as a volunteer and then as a professional church worker at the congregational level and also on the staff of the New Jersey Synod, ELCA.

Pastor Larson attended Upsala College in East Orange, where she was awarded the Bachelor of Arts degree with majors in both philosophy and religion and a concentration of studies in music. She earned the Upsala Award for Excellence in Scholarship and recognition by the Phi Beta Kappa Society of Northern New Jersey. She graduated summa cum laude and was named co-valedictorian of the Upsala College Class of 1987. For her theological training, Pastor Larson attended Union Theological Seminary in New York City. Her studies included an emphasis on biblical studies as well as church history, especially Reformation history and the theology of Martin Luther. Her Clinical Pastoral Education in conjunction with UTS was completed at Nyack Hospital, Nyack, New York, in 1988. Her pastoral internship was served at Trinity Lutheran Church in Bogota, New Jersey, under the direction of The Rev. Stephen P. Bouman, D. Min., who later served as Bishop of the Metro New York Synod of the ELCA. Pastor Larson was awarded the Master of Divinity degree by Union Theological Seminary and was ordained by the New Jersey Synod, ELCA, later that same month on May 31, 1991.

Since her ordination, Pastor Larson has been certified for Pre-Marital and Marital Counseling in the Prepare/Enrich Program. Prior to accepting the call to serve as Pastor of All Saints' Lutheran Church, she served as Pastor of Advent Lutheran Church, Fort Lee, New Jersey, from July, 1991, until January, 2000. Before beginning her pastorate at All Saints' Lutheran Church on February 1, 2000, Pastor Larson served on the Chaplaincy Committee of Englewood Hospital as Promotion Committee Chair from 1993-1998, and as Co-chair of the Doctor-Clergy Seminar Committee from 1998-2000. She was also an active member of the Interreligious Fellowship for the Homeless of Bergen County, serving as general volunteer from 1988-1994, as Southeast Chapter Chair from 1994-1998, and as Vice President for Chapter Development from 1998 - 2000. She is a co-drafter of the 9.5 Theses, a member of the Society of the Holy Trinity (an oratory for Lutheran clergy), and served on the Editorial Advisory Board of Lutheran Forum, a publication of the American Lutheran Publicity Bureau. Pastor Larson is certified as a Master Gardener of Middlesex County, NJ, and is also a Hospital-Certified Master Harp Therapist.